Five teams worked for three days to brainstorm, design and develop a prototype of an innovative, interdisciplinary, intercultural storytelling project. Explore their documentation below.

What will we do?

On 19-21 September Storytellers United organises Story Jam: New Neighbours, in cooperation with Sound & Vision and the Netherlands Film Festival. During three days, you work together in multidisciplinary teams under the guidance of coaches on new intercultural story prototypes.

The stories we will be developing are:

Each prototype casts a different light on the multicultural society of the Netherlands and uses the medium that best suits the makers and their story. Projects can for example take the form of a web experience, but also be VR, performance, app or installation. After three days of working together, the teams will share their results publicly during the Netherlands Film Festival.

See an outline of the programme below.

We warmly invite creatives of all professional backgrounds with an interest in innovative forms of storytelling to take part. Perhaps you do photography, develop websites, produce podcasts, make theatre, are into data visualisation, create immersive experiences in VR or AR, excel at designing user interfaces or you enjoy editing videos for online platforms. Whatever experience you bring, you certainly have an open mind and enjoy collaborating across disciplines.

We especially encourage you to join if you have moved to the Netherlands from another country. With this Story Jam we want to build on the unique perspectives from people who are new to this country and celebrate intercultural collaboration, experiences and stories.

Influenced by migratory flows, including wars, political unrest and climate crises, Dutch society is becoming increasingly diverse. Story Jam: New Neighbours focuses on new stories from these multicultural communities and the social and economic value they bring to the table. How can we support each other and what can these connections and collaborations bring? How can we celebrate social and cultural richness? What can different backgrounds learn from each other? And how can intercultural stories help?

With this Story Jam, we want to challenge stereotypes and expose commonly held myths, put migrants' voices at the centre of discussions about migration and deliver innovative messages to promote the integration of Dutch newcomers into local communities.

Read more about the Story Jam Join us on Slack

💪 Make social impact with stories that connect, at the intersection of storytelling and technology.

🎨 Collaborate with storytellers from different disciplines and cultural backgrounds.

Participation is free of charge, catering will be provided.

Teams will be carefully formed to ensure a variety of skills, based on the information submitted in applications. Applications are sent on an individual basis. In case you want to apply with a team, please clearly mention this and include all team members in the application form.

You're warmly invited to bring project ideas into the co-creation process. Please keep in mind that each team will start with an ideation process to determine a focus that is shared by all team members. We ask you to have an open mind about the ideas you bring in and actively work to let them be enriched by new perspectives of others in your team.

Below is a rough outline of the programme, subject to change.

👉 Have a look at the full programme for more details.

Yiğit completed his undergraduate degree at Yıldız Technical University’s Civil Engineering Faculty. He received his MSc degree on NGO Management from the London School of Economics and Political Sciences with the Chevening Scholarship. Afterwards, he completed a postgraduate degree on International Cooperation and Development at the Barcelona University.

For more than 20 years, he worked on topics ranging from minority rights to environment. He has developed, implemented and scaled up interventions with NGOs, universities, companies and the public sector.

Recently and involuntarily, he is resettled to the Netherlands. He has established Mahalle Art & Kultur as a social enterprise in order to contribute to employment efforts of people with a refugee/paperless/asylum seeking/in exile backgrounds in arts and culture related sectors.

He is the father of two young girls and enjoys watching them becoming adults.

Eefje (1978) studied History at the University of Amsterdam. Between 2002 and 2006 she regularly spent time in Iran where she studied, complied an archive for the International Institute of Social History and worked on her book Stiekem kan hier alles (You can do anything here in secret). Since then, Eefje has developed into an all-rounder in journalism, writing articles and books, as well as creating interactive projects, exhibitions and documentary films. Besides her work as a journalist, Eefje is a committee member of the Mezrab Storytelling Centre, and Grensloos Geluid (Sound without Borders).

Ann Cassano has a background in psychology and cultural anthropology. Since 2008 she has worked on asylum issues, alongside refugees. She is a certified facilitator in Lewis-Deep Democracy and Theory U, and she has read a lot on design thinking and system innovation. In 2019, together with friends, she started The World Makers Foundation, a community of artisans with a minority background. They build upon the diversity of creative talent, skills and heritage newcomers bring with them and provide a platform for their work. They collaborate with local artists and designers. They use the aesthethic force of art and design as a means to connect people and build community. Otherwise Ann reads, writes, and dances flamenco. She is captivated by the art of failure, and by mending.

An ambassador of the Storytellers United community, Anna is a podcaster and researcher, combining a career as a curator in the audiovisual industries with interest in intercultural studies. She holds an MA in interdisciplinary humanities and has been designing award-winning audience experiences at the intersection of audiovisual arts and innovation for almost 15 years. She has collaborated with most important Polish media outlets, brought multimedia storytelling experiences to life, and facilitated over a hundred talks, Q&As, and workshops in physical and online settings.

As a researcher at the Berlin-based boutique consulting agency The Catalysts, Anna helps conceive industry programs for leading audiovisual institutions. She's also an intercultural educator focusing on local history narratives. Anna likes to create meaningful connections between remote concepts, as well as between people. As a child, she wanted to be an anthropologist and her dream came true. Her creative medium of choice is food.

Joscha Jäger is a Creative Technologist and Researcher, working in the field of web-based film and video search engines, with a strong focus on film as information architecture and web-native media format.

Roughly 13 years ago, he started to develop a broad interest in the domain of digital archives, interactive time-based media and search user interfaces that he is since pursuing in different projects and activities. Joscha has been co-organizing the “Workshop on Interactive Content Consumption” (WSICC) at ACM TVX for three years, has previously served as a mentor at Storytellers United Hack Jams and is continuously developing the “FrameTrail” Open Hypervideo Environment.

For the last 5 years, his main focus is on making parliamentary debates more transparent, accessible and understandable in the "Open Parliament TV" project.

Sahand was born in Iran and raised in the Netherlands where he studied storytelling, screenplay writing and music. Since 2004 he operates the Mezrab Cultural Centre, a renowned centre for storytelling and other arts. He’s worked both in Dutch and Persian language media as a writer and programme maker on a variety of cultural, social and political issues. When he’s not in Amsterdam he’s touring the world with his band, his story shows and/or his storytelling workshops.

Paulien Dresscher is working as a curator and researcher in the field of culture and digital media. For the Netherlands Film Festival she is organizing the Digital Culture Programme. She is living with her husband, daughter, cat and dog on a sailing ship in the center of Amsterdam and holds a Bachelor degree of Media and Fine Arts from Minerva Academy in Groningen, as well as both Master degree in New Media and Research Master degree in Media Studies from the University of Amsterdam. 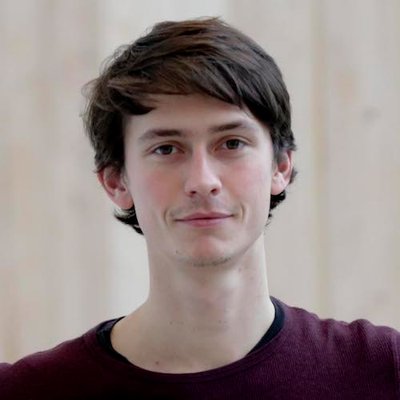 Philo van Kemenade creates tools, stories and things in between to amplify human connection with arts and culture. He helps cultural heritage organisations innovate to make their digital collections more accessible. In 2013, Philo initiated the Storytellers United network to create space for interdisciplinary practice around innovative forms of storytelling. He has a background in Artificial Intelligence and Cognitive Science. Currently based in his home town Amsterdam, Philo has previously lived in Japan, the UK, Slovakia and Austria.

Storytellers United is an international network of media makers, technologists and designers interested in innovative forms of storytelling. Since 2013, SU has partnered with film festivals, universities and broadcasters to explore the future of storytelling in hands-on, multi-disciplinary sprints. These 'Story Jams' mix story, code and creativity with fun and community. Hailing from different time zones and professional backgrounds, members enjoy sharing via community channels: from upcoming events to ongoing projects and from useful tools to exciting opportunities.

Sound & Vision in Hilversum manages one of the world's largest digitised media archives for radio, television, YouTube videos, objects, written press, podcasts and games. They preserve the daily growing media collection as heritage for eternity. At the same time, they closely follow all movements in the global media landscape, including developments in the online and digital domain.

The starting point for all activities of Sound and Vision is the importance of free media for our democracy, to contribute to an open, free, inclusive and media-minded society. They illuminate current affairs from a media-historical perspective and show how you yourself can use media to tell your story, but they also show the influence of media on your personal life and on society. They do this in various ways: online and in the museums in Hilversum and The Hague, but also at partner locations. At schools, they offer a wide range of workshops on media literacy and they also stimulate academic and journalistic research. As an organisation or in cooperation with universities, festivals, organisations at home and abroad as well as relevant companies, they organise countless public activities, workshops, debates and lectures for young and old - and now also this Story Jam.

The Netherlands Film Festival (NFF) is involved in this project as a platform. One of its pillars is the Digital Culture Programme. Like SU and parts of Beeld & Geluid, this department focuses on the development of alternative forms of Storytelling, in which technology and new media play a role. It takes a critical look at the social impact and possibilities of technology and the opportunities this offers for new forms of storytelling. The target groups are festival visitors and filmmakers interested in innovation, as well as digital artists engaged in narrative productions.

By providing a venue for this Story Jam, NFF wants to give a new impulse to the professional field in the Netherlands. It wants to be an inspiring platform and stage for up-and-coming talent and inspire new makers by bringing in national and international experts and opening up new networks.

Story Jam New Neighbours is made possible by a grant from the Creative Industries Fund NL.